California requires all parents to complete a Home Language Survey when they register their children for school. The survey asks:
English Proficiency Testing Process
If the answer to any of the questions on the survey is a language other than English, federal and state laws require that the student’s English proficiency be evaluated. In California, this test is called the California English Language Development Test and  is designed to monitor English language fluency in K-12 students whose home language is not English.
The results of this test determine if the student is an:
English Learner (EL)    OR    Initial Fluent English Proficient (IFEP)
California Ed Code (Sections 60810-60812) requires all students designated as English Learners (ELs) to take an English proficiency test yearly until they become proficient in English. Parents and guardians cannot remove (opt out) their children from this requirement.
ELPAC - English Language Proficiency Assessments for California 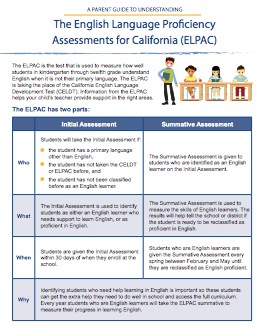